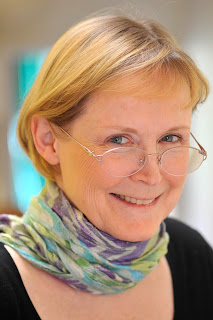 I met writer and human dynamo Bobbie Darbyshire at the Writers' Conference at Winchester last June: she had taken a stand at the book fair there and with the help of a staunch friend she was hand-selling her two novels, Truth Games and Love, Revenge and Buttered Scones, with a compelling mixture of friendly charm and commercial relentlessness! I came away, feeling slightly shell-shocked to be honest, having bought a copy of Love, Revenge and Buttered Scones, which is set in northern Scotland - the Scottish connection had given Bobbie the right angle to close the sale with me. Told in various voices, the novel is a lively romp, full of romantic misunderstandings, farcical twists and gentle satire of literary ambitions.
Since our meeting, I've noticed how Bobbie has waged a tireless campaign to get her books out there, into the hands of customers. Her approach is intensely personal. She appears at branches of Waterstones pretty much every weekend and has built up an enviable total of sales simply by being committed, positive and cheerfully determined. When you publish, you can sit back and expect your publisher to do everything for you (with a strong chance that they simply won't) or you can actively contribute to your own success. Bobbie is proof of how effective the personal touch can be in this book-selling business.
Having recently interviewed Joanna Penn of The Creative Penn and Mark Edwards and Louise Voss about independent and Kindle publishing, I thought you might be interested to hear how Bobbie achieved publication and how she got into hand-selling her books to the public. She's very kindly given detailed responses to my questions, so I'll be splitting this interview into two parts.

I see you've had a varied list of jobs in the past, ranging from mushroom picker to cabinet minister's private secretary! Tell us a little bit about how you came into writing.

Thank you so much, Lorna, for inviting me onto your blog. I was keen writer as a small child but somehow I got derailed. My secondary school wanted no fiction: just parsed sentences and essays about the classics, so I got out of the habit. I remember meeting a girl at university who said, 'I'm writing a novel', and thinking admiringly, 'Wow, I'd love to do that.' So why didn't it occur to me to actually do it? My twenties were all over the place; then I spent my thirties living with someone who was trying to write a novel. I was enthralled, gave him comments, but didn't think to write one myself, I was so busy working at the day job and fretting about life.
Gradually life calmed, I was writing some stories, doing some writing courses, and I formed the plan that I would save hard, quit work and write novels. The day after my last 9-5 - bliss! Aged 47, I immediately began to bash one out. Twelve weeks later it was finished. I remember sitting on top of a bus that day, flying along through the sunshine, thinking, 'I'm a novelist!' I soon realised that book was utter rubbish, but it taught me a whole lot about writing the next one, which was Truth Games.

How did you come to be published by two small publishers, Cinnamon Press and Sandstone Press? How has that experience been for you? Do you feel, for instance, that you are treated with more personal concern? What do you see as the advantages and limitations of this form of publication?

Fiction is a tough market to break into. After false dawns with excited agents, the editors at the big publishing houses were complimentary, but none of them offered a contract. I had a stubborn belief in my novels, kept rewriting, improving, resubmitting them. Unless invited to do so, you can't submit the same book to the same publishing house twice, so I needed to look at smaller publishers. Cinnamon, a well-respected small press, runs a regular novel competition, through which Truth Games was accepted.
I couldn't have wished for a more friendly and instructive introduction to the publishing world. Jan Fortune-Wood at Cinnamon taught me so much with her sensitive suggestions for improving the text, and she gave me a say at every stage, even allowing me to reject image after image in her hunt for an apt cover design. I love the one she finally found. It came from an image library, and it took me a long while to track down and thank the artist, who is a white witch living in Seattle!
My second book, set in Inverness, was not best suited to Cinnamon, who are in Gwynedd and supported by the Welsh Books Council. So when I realised that a Facebook contact I'd made, an up-and-coming independent press called Sandstone, were in Dingwall, only a few miles from Inverness, I crossed fingers and toes tightly before, with Cinnamon's blessing, enquiring whether they were accepting submissions. Twelve days later they said they loved the book and wanted to publish it almost at once.

Again, lots of attention from Sandstone, including a three-week, almost sleepless, joint brainstorm for the title - Love, Revenge and Buttered Scones. And so, after years of rejections, I had two novels out within eight months!
The advantages and limitations of smaller publishers? Hard to say as that is my only experience. Yes, I get personal attention, and my writing and my marketing efforts are valued, but might that not happen in a big press too? The print runs of my books are small, but both presses have speedily reprinted when necessary, so no worries there. I've not had much media exposure - independent presses generally don't have the clout to achieve it - but the big houses tend to concentrate their marketing on established authors, so would it have been so different with one of them? Cinnamon and Sandstone are pleased with my steady sales and my work to build on these, whereas I've heard that big publishing houses can pretty much dump you if you don't set the world on fire within a few weeks of launch. But is that actually true?

You've now spent quite some time out there hand-selling your books to your readership. How did this come about? Did you always intend to take this approach? How far afield have you travelled?

I was naive at the start and quite timid. When Truth Games came out, I nervously did one or two small local events, sat in on a few local reading groups, joined Facebook, approached a couple of book blogs, and called on the three nearest Waterstone's branches, who kindly agreed to stock a few copies. Not much came of this, but I was getting practice.
When Love, Revenge and Buttered Scones came out, I got braver. I began ringing Waterstone's branches further afield to suggest that they stock it. Some said no, but many said, 'Okay, we'll order in three or five. We'll see how it goes.'
I imagined this would translate into sales, but it never would have done. Few customers go to the A to Z shelves, and those who do mostly have a specific title in mind. As a new author, the cold truth is you have to be on the 3 for 2 tables, out there hand-selling, or finding some way to draw attention online. Otherwise your book dies.
A few Waterstone's managers suggested I could come in and sign. I was so green, I thought they meant if I happened to be passing with my pen I could sign the copies they'd ordered. Then the penny dropped. They meant come for a day, we'll get a whole pile in, and you can have a go at hand-selling. And we'll order in copies of both your books, not just the new one. I couldn't believe my luck. I was terrified, but determined to do my best.
My first Saturday signing was in Redhill in April 2010 and I sold 32 books. The manager was impressed, told his region about me, and I was on a roll. Since then I've been in a Waterstone's every Saturday, north, south, west, east, from Bedford to Eastbourne, Dorchester to Tunbridge Wells. It really helps that I live in Clapham Junction! And of course it helps to have no day-job, just a Saturday job now, hand-selling my books; and I love it.

What numbers of sales have you achieved in this way? Do you feel it's been worth all the effort?

I've personally sold and signed nearly 2100 copies in 30 different Waterstone's branches. Looking ahead, more than three-quarters of my Saturdays are already booked between now and next Christmas. All absolutely worth the effort, and not just for the sales. It is smashing to meet my readers, to get a better sense of the reading public and of my market, fabulous to get complimentary emails from readers I've met personally. I'm well-placed to notice trends - e.g more people confessing that they browse real books then go home and download on Kindle. I worry about Waterstone's future and hope the new management can find ways to make the chain flourish.

In Part 2 of this interview Bobbie will share her practical secrets for effective hand-selling, her advice for approaching possible venues - and her under-a-minute book-pitches!

Bobbie will be appearing at the Oxfringe festival in Oxford, with two other Cinnamon Press authors, on 15th, 16th and 17th June - their show is called 'Sex, War and Madness', so promises to be lively!

On Saturday 2nd July she'll be giving a talk at the Writers' Conference at the University of Winchester, called 'The Small Publisher Route to Seeing your Novel in Print'. Oh, and I'll be there too: my mini-course on Character Building is on Friday 1st July and my Saturday talk 'Place is Paramount' is about how crucial setting is to the effect of your story. Visit the Conference website for further details - we hope to see you there!
Posted by Lorna F at 16:26

Email ThisBlogThis!Share to TwitterShare to FacebookShare to Pinterest
Labels: publicity, this writing business