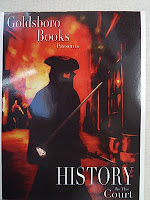 It was a week for getting out to listen to and meet other writers: on Tuesday I was at Kellogg College, here in Oxford, where students on the M.St. course in creative writing read their poems and excerpts from their fiction.  They were incredibly young and incredibly confident in their delivery. Really impressive stuff. Dr Clare Morgan, who is in charge of the course, read from her novel A Book for All and None, which involves an academic quest for the truth about Virginia Woolf and Nietsche. The guest reader was Philip Pullman who, as ever, gave wonderful readings from  The Amber Spyglass and from his new version of selected Grimm's fairytales. He set about enchanting us all with his verve, his sense of pace and pitch - and doing the voice of Iorek Byrnison in a startlingly loud growl that contrasted dramatically with his usual urbane huskiness! 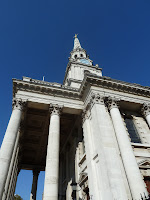 On Thursday I set off for London, not the place I'd normally choose to head for on a day of extraordinary heat ... Goldsboro Books were holding a special event in and outside their shop in Cecil Court, near Leicester Square. I arrived mid-afternoon, so amused myself by visiting St Martin's in the Fields and the National Portrait Gallery.

In the NPG, it was great to rediscover my old favourites - although one of those, the portrait of John Donne, had been taken off the wall for conservation, dammit. Went round Glamour of the Gods, the gallery's exhibition of photographs from the golden age of Hollywood. Gorgeous, dahling! Loved the pictures of Gloria Swanson - wearing an extraordinary white peacock headdress - , Louise Brooks, Garbo and Gilbert, Clark Gable with a young Joan Crawford, Elizabeth Taylor while filming Suddenly Last Summer. Harlow, Dietrich, Rita Hayworth (starting to sound like Madonna's lyrics for Vogue!), Vivien Leigh, Ava Gardner ... Too, too delicious! Both disconcerted and reassured to see an example of the huge amount of retouching that went on, back in the days before the digital airbrushing of looks, to create that Hollywood gloss, that ethereal supramortal glamour. My favourite was the show's centrepiece photo of Rock Hudson in his heyday, looking haunted, vulnerable and utterly, gorgeously male. 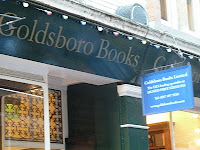 Early evening, then, and on to Goldsboro Books, and its gathering of authors and readers devoted to writing about and reading about earlier times. It was an extraordinary event, bringing together writers who write about everything from the ancient Romans through to the middle of the 20th century, by way of Anglo-Saxon warriors, Crusader knights, Tudor detectives ... in fact, detectives of pretty much every era. Writers devoted to intrigue, crime, adventure, religion and romance. Writers bound to justify and explain their knowledge of background to fans eager to adore and equally eager, perhaps, to catch them out! 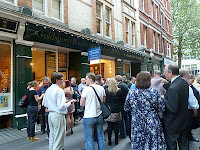 Copious quantities of wine were drunk and 'medieval pie' was served (like a blend of mince pies and bread and butter pudding!), books were bought and signed. Everyone was happy. Luminaries like Bernard Cornwell were there. I tried, and failed, to see C.J. Sansom (regular readers of this blog will know how keen I am on his books). Stella Duffy, Laura Wilson, Barbara Erskine, Michael Jenks, Elizabeth Chadwick, Robyn Young, Harry Sidebottom, Manda Scott ... that's just a selection.

Well, I wasn't going to come away without buying a book or two, now was I? I treated myself to Rory Clement's latest Tudor mystery, Prince, and to Karen Maitland's The Gallows Curse - and I had excellent chats with both of them. I've read Karen's two previous medieval novels, Company of Liars and The Owl Killers - and think they're superb. She knows her era in exquisitely horrible detail! She pulls no punches in the depiction of the dark and superstitious lives of her characters and her stories are rich in texture and voice. She's especially good at depicting the lives of women and the spiritual oppression of the time. Rory's books - Prince is the third in a series featuring John Shakespeare, brother of the more famous Bill - are going from strength to strength. They're dynamic, pacey adventures which make full use of his knowledge of Elizabethan intrigue and treachery, featuring famous characters like Drake, Essex and Cecil.

I was also delighted to make the acquaintance of a fellow-Scot, Douglas Jackson, who writes both thrillers and historicals (The Doomsday Testament, Caligula - part of his Roman trilogy) and of Robert Fabbri, who writes about the Emperor Vespasian, starting with Tribune of Rome. 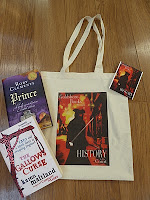 So many books to read, so little time! Visit the Goldsboro Books website to find out more: the bookshop is an excellent source of signed first editions if you're a collector. I'm sure after the success of this event and of their previous Crime in the Court evening, there will be more opportunities to meet and greet the authors you love!

Finally, I'm delighted to announce that novelist John Harding will be guest-posting on Literascribe in the next few days, talking about his varied output as a writer and his latest (absolutely brilliant) novel, Florence and Giles.
Posted by Lorna F at 16:06