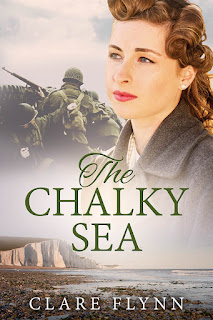 Today I'm welcoming Clare Flynn to Literascribe. Clare has just published her fifth novel, The Chalky Sea, set during World War II, and I invited her to tell me how she drew on local knowledge and local history when she wrote it. The result is a fascinating article, reminding us that we often don't know the details even of the recent past, in the places familiar to us. If you're a writer and you choose an exotic location, you're all set to research it thoroughly, whether in person or on the internet. But even if you're writing about home, you need to look at it with a fresh eye and delve into records and old images - you will be amazed by what you turn up, as Clare proves here!

I recently moved to Eastbourne, on the Sussex coast. I lived here as a teenager and because I love the sea and the Downs decided to move back after twenty years in London. I get very cross when people have a go at Eastbourne – describing it as “God’s waiting room” and the like. Someone reviewing my novel Kurinji Flowers referred to the fact that the main character honeymoons here in the 1930s with the comment “I suppose someone has to”. There is so much more to this town as I quickly discovered.

During my school days in the late sixties/ early seventies, no one spoke of Eastbourne’s pivotal role in the Second World War. It was as if the town had put its past behind it and wanted to focus on the present. So it was a big surprise when I moved back and discovered that it was said to have been the most heavily bombed town in south-east England.

Walking the streets the evidence was there – I just hadn’t noticed it. There is the ugly 1960s extension tacked onto the Victorian Cavendish Hotel on the seafront, built to replace the original east wing bombed in May 1942; the Central Library is a modern building, opened in 1964 to replace the red brick structure that was destroyed in 1943 and there are post war buildings to replace Marks & Spencers – bombed while people were doing their Christmas shopping in December 1942, Barclays Bank (1943), and the central fire station (1943), St John’s church, Christ Church junior school, to name but a few – as well as four hundred and seventy four houses. For years I had walked unknowingly past an unmarked spot, where a blast shelter sustained a direct hit, killing everyone inside during a raid that across the town centre claimed thirty-two lives with ninety-nine injured.

One hundred and ninety-nine people died in the bombing raids on Eastbourne – one hundred and seventy-two of them ordinary civilians. The raids began in July 1940 and continued until the last bombs fell in March 1944. As well as being bombed out of their homes, the townspeople endured being strafed in the streets by machine-gun fire from the fighter-bombers. The early raids were doubtless to soften up the town ahead of Hitler’s planned invasion, Operation Sea Lion, which was expected to take place along the Sussex coast. But the bombing didn’t stop when the invasion was called off. Eastbourne suffered from bombs dumped on the return leg from London and the Midlands but, being just a short hop across the Channel, it was subjected to “tip and run” raids with bombers coming in low under the radar then, as they reached the coast, climbing up over Beachy Head to the Downs, banking and swooping down to attack the town before nipping back across the Channel. These attacks were not aimed at strategic targets – there were none – they were designed to cause terror and damage morale.

Another factor that may have made the town a target, especially in the run-up to the catastrophic allied Dieppe raid, was the presence, from 1941, of thousands of Canadian soldiers until the D-Day preparations of 1944. They were essentially the allies’ reserve army and thus an attractive target for the enemy.

The town also witnessed the loss of German life. The first “kill” over Eastbourne of a German fighter plane happened at the end of my road. A twin-engine Messerschmitt Me110 was shot down and crashed into the grounds of the Aldro School – now part of Brighton University’s Eastbourne campus. The pilot, Hauptmann Ernst Hollekamp, already dead, landed on the roof of another school half a mile away, while the rear gunner parachuted into the sea and drowned. For years, the people of Eastbourne believed the crashed plane to have been a Henkel bomber until the pilot’s widow visited the town and confirmed he had flown a Messerschmitt.

With the heavy bombardment of Eastbourne, which began a month before the London Blitz, the vast majority of the population evacuated, so that the local MP described the place as “Ghost Town on Sea”. The arrival of the Canadian army must have been welcome to the pubs, cafes and retailers who remained open throughout the war.

With all this history on my doorstep, it was impossible to resist the idea of setting a book here. It was not in the plan when I moved, but within two months of arriving I had started writing The Chalky Sea. The book is set mostly in Eastbourne, but also in Aldershot, where numerous Canadian regiments were garrisoned throughout the war years, and a little bit in Ontario, Canada.

The challenge in writing fiction based on actual events is to be respectful to those involved while also being accurate. It is probable that relatives of victims of the bombings still live in the town. I have used real bombings, but all the characters involved are completely fictitious. I have tried to ensure that I stuck closely to the dates and places that were actually bombed, beginning with the first attack on the town in Whitley Road at 11.04 on July 7th 1940 – a Sunday morning. If people die in the book, then people actually died in that raid at the time. Sadly with so many raids there was no need for invention.

The book follows two main characters – Gwen, an Eastbourne woman, alone and refusing to evacuate the town after the departure of her officer husband to an unknown destination for what we now know as Special Operations; and Jim, a young Canadian farmer, who joins up in a fatalistic effort to escape from a broken heart. The Chalky Sea follows their individual journeys and examines the impact of war on them and how it changes them profoundly. 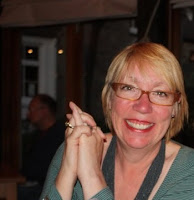 Clare Flynn writes historical fiction with a strong sense of time and place and compelling characters. Her books often deal with characters who are displaced - forced out of their comfortable lives and familiar surroundings. She is a graduate of Manchester University where she read English Language and Literature.

Born in Liverpool she is the eldest of five children. After a career in international marketing, working on brands from nappies to tinned tuna and living in Paris, Milan, Brussels and Sydney, she ran her own consulting business for 15 years and now lives in Eastbourne where she writes full-time – and can look out of her window and see the sea.

When not writing and reading, Clare loves to paint with watercolours and grabs any available opportunity to travel - sometimes under the guise of research.

Want to be a writer? Visit my website to download your free guide to living a productive writing life.

Thank you so much for inviting me onto Literascribe, Lorna