Get your metaphors in a twist!

Metaphors are incredibly powerful tools, when you get them right - but writers can give too free a rein to their imagination, letting the horse of figurative language have its head (see what I'm doing here?) and they can fall at the Becher's Brook of comprehensibility.

Only Shakespeare can get away with this sort of frantic coinage of the mind: famously, Hamlet talks of taking arms against a sea of troubles, for instance, and Bill makes it work precisely because of the Canute-like absurdity of military action against the ocean.

My favourite mixed metaphors are 'I smell a rat! Shall I nip it in the bud?' and one which one of my students heard in a meeting: 'The road-map is on track to take off.'

And here today is another corporate-speak nonsense: one of Bloomsbury's sales and marketing people, when interviewed about their new deal with Google e-books, describes the advantages (apparently. Hmnn...) to authors and indie booksellers: 'Anyone that has any platform with any legs moving forward is on cloud.' 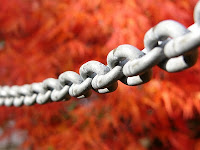 That's as may be. I'll worry about that later. Now it's December 1st and time to turn to a new page on the calendar. If I put a red cross in the box later today I know I'll have to keep doing it!
So, many thanks, Drew and Jerry!
Now try it for yourself. Here's your mantra: don't break the chain!
Posted by Lorna F at 11:14 2 comments: