I'm immensely proud and delighted that my unpublished children's novel Hinterland has made it to the eight-strong longlist for Macmillan's Write Now Prize. This process began when I submitted the synopsis and first three chapters back in December. In January, the full novel was called in, and a few weeks later I was notified that I'd made the longlist. I couldn't make this public for quite a while (argh!) but now the competition is heading into its next stage. Independent bookshops and their customers will get the chance to view the longlisted books via extracts and summaries - and they're the ones who'll vote for shortlist of four, whereupon a panel will choose the winner. The winner's book will be published in hardback and available exclusively to independent bookshops initially. I think this is a brilliant idea and hope that as many indie bookshops as possible will sign up - and that you, the customers, will join in with the process! 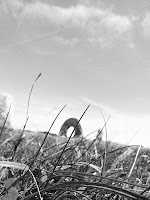 The other stories in the longlist are briefly summarised on the competition website: they sound dauntingly witty, adventurous and intriguing! I think it'll be a challenge to make the shortlist, but it goes without saying that I'd be ecstatic if it happened!

Here's a brief synopsis of Hinterland, along with a photo of a very significant location far to the west ... Hope you enjoy it!

'I hope you die!' yells Kick Delaney at his sister Olivia. Minutes later she's knocked down by a car. From then on, she's his 'zombie sister'. When the family moves to Cornwall, he discovers Olivia's zombie state is a defence against the Soulbroker, who's seized part of her soul and wants the rest to sell to the Anhungert, voracious entities of the Hinterland, the realm behind our own.

Kick fights to save Olivia, with the help of Argentail, the moon-dragon avatar of a long-dead Cornish mage. Ultimately, Kick must pursue the Soulbroker into the Hinterland itself. And it's there that a shattering choice awaits him.

Finally,  a reminder that my next Fictionfire courses are on the 18th and 19th of May (less than two weeks to go!). If you want to learn how to plot and pace your story, or how to craft a submission, go to my website to find out more and make your booking. Bookings must be made by midnight on 16th May. Also, if you've tried to ring or text me, my phone hasn't been receiving messages for a couple of weeks. I've changed phone and network so contact me again from the 8th, when the new network should kick in.