Inheritance of Time: Alison Weir's book launch at the Tower of London 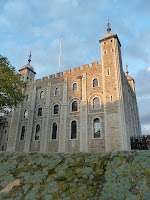 Regular readers will know how keen I am on history and historical fiction, so I was delighted when Alison Weir invited me to the launch of her new book, A Dangerous Inheritance, at the Tower of London on Wednesday evening. For many years, Alison has been famous for her numerous books on history, covering subjects from Eleanor of Aquitaine to Henry VII's wives. A few years ago, she started writing historical fiction too, her first novel, Innocent Traitor, being about the nine days' queen, Lady Jane Grey. Her close knowledge of the period has of course lent all her novels authority, plus readers are always keen on the 'what might have happened' possibilities of history. Her latest has two central characters: Katherine Grey, imprisoned in the Tower like her ill-fated sister Jane, and Kate Plantagenet, the illegitimate daughter of Richard III, who has set herself the task of finding out what happened to the Princes in the Tower, seeking to clear her father's name of the crime of murdering them. The two time periods and the supernatural hints put me in mind of Barbara Erskine. 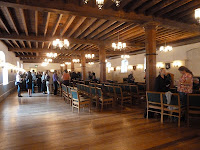 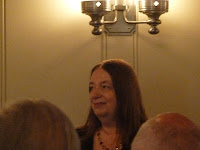 The launch was held in a gorgeous room in the New Armouries building of the Tower and it was extremely well attended: Alison clearly has legions of loyal fans. She talked fascinatingly about the research she's done for the novel and of her view of the two main characters, interspersing this with readings. Kate Plantagenet is the more obscure, less-documented character. The benefit of this is that Alison has had more scope to imagine what she was like and what actions she might have taken, whereas Katherine Grey's life is much more fully recorded. Clearly Alison sympathises with both, but with perhaps a slight note of impatience towards Katherine Grey, who probably wasn't the brightest of bunnies compared with her formidably learned sister. What does create enormous sympathy, though, is how young these girls were when dreadful events overtook them. This reminded me of the unfortunate Katherine Howard, Henry VIII's fifth wife, whose air-headedness brought her to the block. In another era, she'd have just been yet another giggling girl, with her fads and fancies and promiscuity, and eventually she'd have grown up and settled down - only she wasn't given the chance. 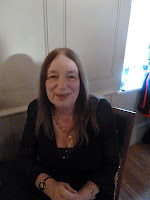 Alison went on to talk about writing historical fiction in general and engaged in a lively question and answer session with her audience. She discussed the perennial problem of diction in historical fiction - the tension between two many prithees and a jarringly modern tone, agreeing that it's impossible to please everyone with the language you choose. She talked of the joys of switching between history and fiction and how she's getting more used to using a 'dollop of imagination', while at the same time making sure it's an 'informed imagination'. She told us how her agent said at one point 'You've got to come off the fence and stop being a historian and start being a novelist.' She never loses her love of research, the desire to find out, the desire to base her ideas on evidence. With regard to future topics for her history books, she said 'I don't count sheep at night, I count subjects I can write about!' Before signing books and chatting to fans, she declared 'It's lovely to be let out to do events' after the solitary writing process. 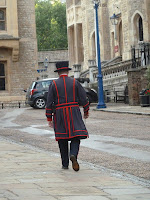 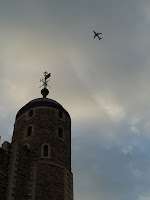 Afterwards, I took the opportunity to stroll around the Tower site. Scroll down to view some of the photos I took: I was particularly struck by how the views blended ancient and modern - a plane heading for Heathrow passing by the weathervanes on the White Tower, Tower Bridge in the background with the giant Olympic rings hanging from it, the very striking glass sculpture etched with the names of those who were beheaded on Tower Green, the sign inviting us to visit Torture at the Tower, the gleaming pyramid of the Shard seen beyond the half-timbered house where Guy Fawkes was questioned. Everything neat, manicured, signposted for tourists, and yet chilling. That tidy lawn saw executions. That tower saw imprisonment of despairing souls. That gate on the water let in those who would never depart. It's a fantastic tourist attraction - but we should all feel more than a delicious shiver at the thought of the past's dark deeds. The raven himself was hoarse that flapped down past me to land on the Information booth ... 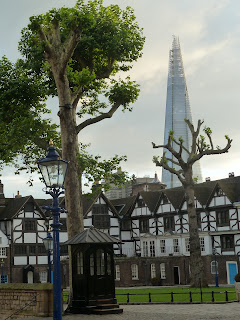 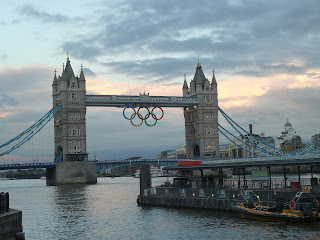 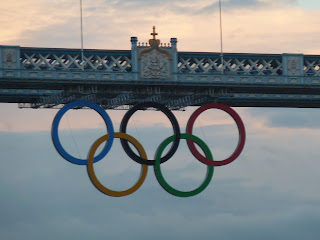 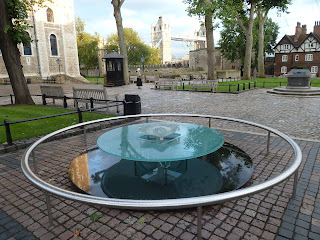 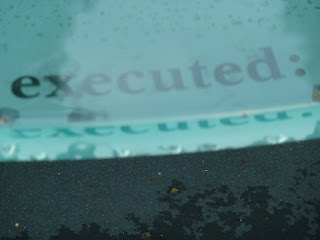 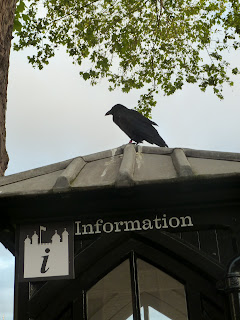