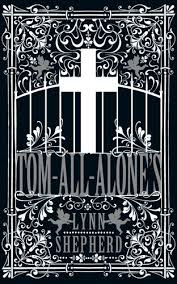 I've read a couple of books lately where I got through in sporadic bursts, determined to get to the end but not particularly caring, in between reading stints, how long the interruption might be. Just as well, really, given that I've had a lot on my plate during the last month. This week, though, I picked up Lynn Shepherd's Tom-All-Alone's - and I hated interruptions, couldn't wait to get back to it, devoured it in three sittings. Lynn has written a literary murder mystery (her previous book is Murder at Mansfield Park - so we can see a pattern here!), which is described by her publishers as 'Dickens but darker'. Her gripping tale of murder and detection is set against the underbelly of Victorian life. The book has been inspired by Dickens' Bleak House and she cleverly weaves characters and plot references from it and from Wilkie Collins' The Woman in White into the adventure of her detective, Charles Maddox, previously employed by a certain Inspector Bucket. Tom-All-Alone's is written with utter confidence: it's pacey, intriguing, often very scary and unapologetically graphic in its depiction of mid-nineteenth century London in all its corruption - whether the obvious corruption of shallow graves, filth and stench, or the more subtle corruption of hypocrisy, treachery and manipulation. I absolutely loved it and I'm delighted to introduce Lynn's guest-post on how she set about creating the atmosphere of the novel's locations.

REVISITING DICKENS' LONDON - AND DISCOVERING ANOTHER 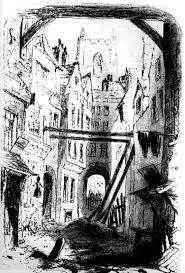 One thing everyone knows about Dickens - whether they've read him or not - is that he is London's literary patron saint. Whole generations have grown up seeing Victorian London through his eyes, from the grime on the streets to the phoney glitter of the Veneering house in Our Mutual Friend, where everything is 'in a state of high varnish and polish'; from the Marshalsea prison in Little Dorrit, to Fagin's Saffron Hill lair; from Quilp's rat-infested dreary yard by the Thames, to Lincoln's Inn Hall in that astonishing opening of Bleak House, where the Lord High Chancellor sits in his High Court of Chancery, 'at the very heart of the fog'. I'm not the first to say that London is a character in its own right, and as I started work on a murder mystery of my own inspired by Bleak House, one of the most challenging questions I faced was how to bring that character to life in my own story - and my own words.

So how did I do it? Lots of research, of course, that goes without saying, but there was one source of information that I used more than any other. In fact it became almost as important in the structure of my story as Bleak House itself. Henry Mayhew's London Labour and the London Poor is to Victorian non-fiction what Bleak House is to fiction - Neil Gaiman has said it's 'like a big mad Dickens novel that just keeps going'. It's certainly an immense and seething panorama of the noisy, filthy, crowded streets - coster barrows, coffee-stalls, street performers, animal dealers, 'toasting-fork makers, pin-makers, engravers, tobacco-stopper makers, stocking-weavers, cabbage-net makers, night-cap knitters, doll-dress-knitters, leather brace and garter makers, and glass-blowers'.

Mayhew conducted thousands of interviews with the London poor and gives many of these conversations virtually verbatim, making his book the closest thing we have to a documentary account of how people really lived in the middle of the 19th century. if you haven't read it, I really recommend it - his is a cast of unforgettable real characters, talking in their own words. Reading Mayhew is like walking with him side by side, listening to what he hears, and seeing what he sees - and in fact I have my young detective, Charles Maddox, do exactly that in one episode in Tom-All-alone's when I send him into a pub on the City Road to witness the same rat-killing Myahew himself describes, on what - with a little artistic license - I imagine to be the very night Mayhew was there.

The other marvellous thing about Mayhew is that he tells us things Dickens only hints at. Dickens may describe urchins scavenging in the mud, but it's Mayhew who tells us exactly what it is these 'pure-finders' are collecting (dog excrement, for use in tanning, if you're interested). And Dickens may talk, somewhat disingenuously, about the mud in the streets, 'which is made of nobody knows what and collects about us nobody knows whence or how', but it's Mayhew who makes it clear that what 'the sewers in many parts of our metropolis ... remove at low water they regularly bring back at high water to the very doors of the houses whence they carried it.' The contents of one's lavatory, in other words, were regularly to be found collecting about one's doorstep too. Indeed as late as 1829 a mother and baby died when they fell through their rotten privy floor and drowned beneath it in their own cesspool.

One of the greatest delights in writing Tom-All-Alone's was that it allowed me not just to revisit Dickens' city, but to discover Mayhew's as well. And I found, in doing so, that Victorian London had not just one 'genius of the place', but two.

Tom-All-Alone's was published yesterday by Corsair and will be published in America in May, under the title The Solitary House. Both these titles were, by the way, possible titles Dickens considered for Bleak House. The novel offers a certain smug pleasure for those who can spot the literary references - and I'm looking forward to the next in the series, clues to which are planted in the final pages! Bleak House is my favourite Dickens novel, so it was a joy to read a story with echoes - and even a kind of ventriloquism, capturing entirely the tone, voice and bearing of such characters as the monstrously chilling Edward Tulkinghorn and the politely controlling Inspector Bucket, who plays his cards always so close to his chest. Some chapters are written in the voice of 'Hester' - as sentimentally modest and irritatingly 'little me' as Esther Summerson herself. If this is a 'tribute novel', it's of the highest order. It offers more, too, than literary ventriloquism: I was moved by Lynn's depiction of the relationship between Charles and his uncle, a man with a once razor-sharp mind sinking into dementia. The pathos and frustrations of scenes where the old man tries to keep the shadows from encroaching as he descends into panic and aggression, were  powerfully realised.

If you're a Dickens fan, if you like Sarah Waters and Jane Harris, if you enjoyed Michel Faber's The Crimson Petal and the White, you'll love this. Tom-All-Alone's is available here and Lynn's website is here. Murder at Mansfield Park is currently available on Kindle for 99p here.

Want to write, edit, publish or market your story? Here's how!

My current Fictionfire Focus Workshops are fully booked - I hope to announce the next series very soon. In the meantime, here's a little reminder of four Day Courses coming up in May at Trinity College, Oxford. These courses are designed to take you through all the processes from writing your novel to publishing it and marketing it. I'm delighted that Ali Luke of Aliventures.com and Joanna Penn of The Creative Penn will be guest speaking on the publishing and marketing aspects.

19th May: Write It!
This course is all about getting the words on the page, before you move on to editing and selling the book. Here we'll look at all the key components of writing your story: motivation; sources of inspiration; creating character, plot and pace; using point of view, voice, dialogue and setting.

20th May:  Edit It!
This course is designed to show you the essential techniques you need to edit your own work effectively and to help you see these skills as integral to your creative life as a writer. We'll look at the different types of editing and how best you can present your work to an agent or publisher.

26th May: Publish It!
In this course, we'll explore the various routes to publication, whether mainstream or independent, print or electronic. We'll discuss how the publishing process works, how to approach agents and publishers, how you can go it alone - while at the same time producing a novel which looks professional and eye-catching. 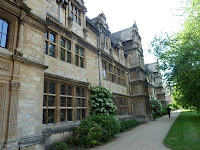 How can you let the world know you've written your book? This day course concentrates on how you can create awareness and buzz. You'll learn about the importance of creating your 'author platform' whether you're following the traditional route or are self-publishing; how to write a book-marketing plan; how to use social networking, blogging, audio, video and podcasting; how to garner reviews. 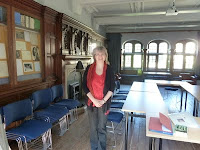 Each course will involve illustration, discussion, analysis of published examples and writing exercises. There is currently an Early Bird price deal, so don't leave it too long to book! For fuller details of the courses and speakers and for descriptions of the gorgeous location,  go to my website: here and here. If you have any questions or want to contact me, email me at info@fictionfire.co.uk

I hope you can come along!

Tomorrow on this blog I'm delighted to announce that Lynn Shepherd will be guest-posting on her use of location in her novel Tom-All-Alone's, published today. The novel is inspired by Dickens' Bleak House and she'll describe how she went about creating a truly powerful atmosphere for her Victorian murder mystery.