My second report on this year's festival focuses on women writers. I love Edith Wharton for her irony, for the pathos of the situations her characters find themselves in, for her acute social observation, so I attended a talk given by Professor Janet Beer and Professor Avril Horner at Corpus Christi  last Tuesday. They performed an interesting double act, taking turns to read from and analyse some of Wharton's later work. In terms of women's history this was compelling: I already knew about Edith's privileged upbringing and disastrous marriage to Teddy, the end of that marriage and the way she relocated herself in France. I knew she was extremely knowledgeable, but not that she annotated her books in French, Italian and German (now that's just showing off). I'd forgotten, though, that she didn't publish until she was forty (she was born in 1862) and that her later works, from 1925 onwards, are often dismissed by critics as pot-boilers - it was these works the speakers wanted to draw our attention to. 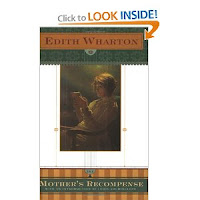 I have to say I didn't find these examples all that appealing, published in magazines with melodramatic illustrations, but I did respond to what she was trying to do, which was to explore the position of the 'mature woman', the woman who Wharton felt was not properly represented in fiction except as a parent-figure, the woman who is supposed to be beyond romantic passion and yearnings, who is supposed to make way gracefully for her daughter or the young woman with innocence, bloom and potential. She had written an extraordinary story called 'The Mother's Recompense' - her heroine deserts her husband and child for a younger lover, and later discovers after the affair is over that her lover has now courted her daughter. This had all the potential of Greek tragedy, but written in a style that evoked bobbed hair and long strings of pearls. She wrote a Gothic story called 'Miss Mary Pask' in which the hero talks to the heroine, thinking she is dead, not having been told she's recovered from a catatonic trance (as you do). Wharton said she wrote this for 'the fun of the shudder' which is as fine a description of the appeal of Gothic as I've ever heard. In 1928, she wrote a novel about Americans at play in Europe, 'The Children', in which male attitudes towards extremely young girls are singularly inappropriate - so she's well ahead of Nabokov there, striking uneasy echoes of the distasteful obsessions of Victorian gentlemen with anorexic teenage misses (Rose la Touche, anyone?). Profs Beer and Horner reminded us that in the 1920s there was a vogue for 'nymphs' and that Charlie Chaplin made a fourteen year-old girl pregnant.

I have to say that I didn't feel like rushing out to read any of these works but I think it's admirable that she was playing with genres as a way to explore what we would nowadays call 'women's issues', timeless questions of female status in society, how society defines the worth of women, how women relate to one another and to the men in their lives. In addition, I came away with an extreme case of library-envy: she had a sequence of mansions in America and France - and each house had to have its library. Now that's style!

On Friday, instead of a female writer being discussed, that writer was very much discussing herself, in front of a packed lecture theatre in Christ Church. Jane Shilling's memoir The Stranger in the Mirror is  a very honest, non-sentimental exploration of what it means to reach middle age as a woman. She was sparky, confident, witty. She is very upfront about the way women have to adjust to physical change and to the way society regards them. She highlighted the problems, for instance, of dressing appropriately - how when we were young there was a very clear demarcation in terms of how to present yourself at different ages. Women were, of course, middle aged earlier then: I remember my mother in the twinset brigade in her thirties. My Granny was a 'Granny' by her fifties, no doubt about it. No dyed hair, no botox, no jeans, no fillers - bodies were allowed to sag and crease, disciplined only by Playtex bondage-corsetry. Nowadays, we middle-aged women sail between the Scylla of looking like mutton-dressed-as and the Charybdis of looking 'tired' and old. Jane highlighted how newspaper and magazine articles crow when some poor celebrity is caught actually looking their age - but equally how vile it is when we are conditioned to admire the likes of Helen Mirren,  held up as a role-model and inspiration for looking so good 'for her age'. She said there's no 'sartorial caesura' marking the transition between what you should and shouldn't wear. This is so true - yet I find the range of shops I feel comfortable shopping in narrows and narrows, until shopping for clothes, one of the utter joys of my life, has become a burden, a task, a pressure which I'll do anything to avoid. 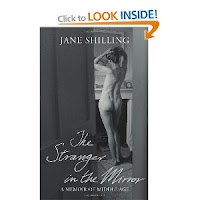 Jane talks of 'the diminishing of physical daring', of the joys of the menopause, which is viewed in society as 'a curable deficiency', about loss of confidence, of encroaching 'invisibility'. Ah, how the audience nodded! A fine Oxford audience of women of a certain age (and a few men), well-dressed, well turned-out, with their good leather bags and their good haircuts (whether the hair is dyed or not). Jane insisted she hasn't written a misery memoir and certainly she has not: she's far too confident for that - anybody who is brave enough to put a back view of themselves totally naked on the cover of their book cannot be lacking in the confidence department. I bought - and am enjoying - the book: there's much to recognise there. Yet, I don't know - she was so well-groomed, so eye-wateringly explicit, so bloody-yet-unbowed, so preaching to the converted, that I found my response was strangely ambivalent. I felt somehow as if she'd led a golden, exalted life, where 'off' is pronounced 'orf', where your trips to the stables are a necessary part of your life and where you measure your new fragility by bruising terribly when you fall orf your horse. It was all a bit Hampstead chattering classes, I feel - which meant that it appealed to the North Oxford chattering classes too. That said, the book is extremely well written and observed, often very funny and I do recommend it.

Do you want to tell a tale? Unlock your writing potential at my upcoming series of four Fictionfire day courses at Trinity College, Oxford in May.

The photograph you have here is NOT Edith Wharton, it is Agatha Christie!

Thanks very much for pointing that out - I've changed it now.