Florence and Giles by John Harding: mastery of language and narrative voice 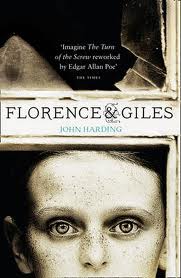 I'm so delighted that the lovely John Harding is going to guest-post on Literascribe, but before he does, I thought I'd say something about his latest novel, Florence and Giles, which I read a few months ago and have been recommending to everybody ever since. John has written four novels, all very different from one another, which can be a problem, given publishers' preference for writers who plough one furrow and one alone. Florence and Giles is a Gothic story: The Times said of it 'imagine The Turn of the Screw reworked by Edgar Allan Poe.' Yes, it has elements of Henry James (but is, thank God, far more readable!) and elements of Poe - but its appeal is more subtle and original than that of pastiche Victorian creepy story.

John says that 'the first thing that came to me was Florence's voice' and for the reader, this is what captures and holds the attention. His central character is a little girl living in the standard-issue Gothic mansion, orphaned, forbidden to learn to read - though she circumvents this by sneaky visits to the house's library. She devours books and acquires a strange language all of her own, part-naive, part-scarily adult, which breaks grammatical rules all the time. Nouns become verbs, verbs become nouns - ordinary language is subverted and refreshed for the reader. You become alert to nuance and shades of significance because you are constantly being startled by these small linguistic ambushes.

At first I feared I'd find such verbal precocity an irritation - or even twee. But before long I was totally seduced and enchanted. Like her language, Florence inspires sympathy and wariness - her preternatural calculation of meaning and intention is unnerving, her vulnerability makes you want to protect her, her love for her younger brother, love which drives her to extreme actions, is utterly believable.

You find yourself beginning to think like Florence and to find her phraseology natural and right. John achieves the same sort of economy Shakespeare achieved when compressing whole clauses into single telling words: Shakespeare's Antony, facing defeat by Octavius Caesar, asks his servant whether he'd want to be 'window'd in great Rome', his lover Cleopatra fears that 'rhymers' will 'Ballad us out o' tune' and that she'll see 'some squeaking Cleopatra boy [her] greatness/I' the posture of a whore.' With similar economy, Florence refers to how her first governess 'tragicked' in a boating accident. She talks of a 'puzzlery of papers' and a 'twiddlery of thumbs', of how she and her brother, when happy, 'had halcyoned it for four whole months', how in the isolated house, she 'fairytaled in my tower, Rapunzelled above all my known world'.

The novel is peopled with strong characters, my favourite being Florence's gangly asthmatic friend Theo van Hoosier. The scariest is the second governess, Miss Taylor, who tries to take control of Florence's life and rob her of that which is most dear to her. The duel between the intense, resourceful young girl and the chilling determination of the older woman is absolutely riveting.

The other focus of interest in the novel is the question of Florence's reliability as a narrator. As with The Turn of the Screw, there is doubt for the reader about what is and what may be. We are shown and told a great deal but we have to make judgements and discriminations. We're desperate to know and wonder if we ever will know. Florence and Giles is rich in atmosphere and description, has twists and turns and genuinely scary moments. When you've read it, you'll be very careful about looking into mirrors ...

In my next post, John will talk about his experience of promoting Florence and Giles and the whole issue of author 'branding'. John's website is http://www.john-harding.co.uk
You can also follow him on Twitter @JohnRHarding
Florence and Giles is available on Amazon and has been a great success on Kindle.

Meanwhile, my new Fictionfire Focus Workshops are coming up in November and December - go to the Focus Workshops page on my website for details of dates and topics. Booking is also open for my spring day courses: Write It!, Edit It!, Publish It!, Market It! - details here.

I loved the way the author maintained the 'voice' of Florence all the way without seeming to 'overwork' it.I think even more could have been held back at the end to make the story even more disturbing but I too would recommend it to anyone who loves a good gothic tale and a great read.