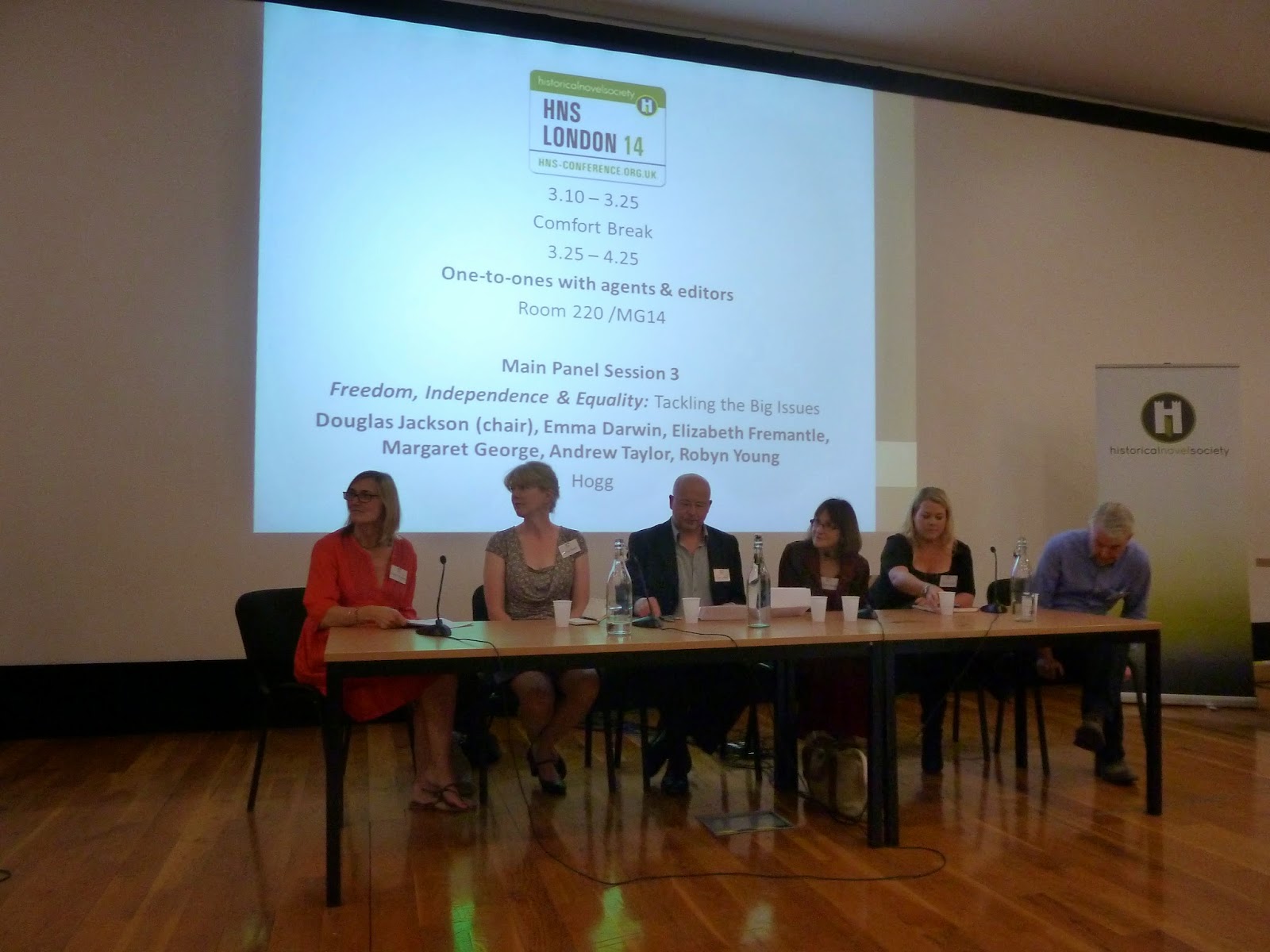 Douglas Jackson chaired a very topical debate on the afternoon of Saturday 6th September, considering the Scottish Independence referendum was due to take place a couple of weeks after the conference. On the panel were Emma Darwin, Elizabeth Fremantle, Margaret George, Andrew Taylor and Robyn Young, all discussing ‘Freedom, Independence and Equality’.

This is, of course, a pretty wide-ranging topic, so during the course of the session, issues of power within society and power and freedom according to gender were discussed. In terms of gender, Elizabeth Fremantle reminded us Queen Elizabeth 1 was less free than other monarchs because she was female. Katherine Parr ‘accepts that she is a lesser being’ than men, in spite of being an author and scholar. Emma Darwin pointed out the problem of having ‘a woman as your protagonist – we look at the gap in the written history but it may be a gap because there’s not a lot going on.’ It’s not good, she went on, ‘to turn every fifteenth century woman into a feminist and every fifteenth century man you’d like the reader to like into a fifteenth century feminist.’ Later Robyn Young said ‘women are ghosts in the narrative.’

It isn’t just in the area of gender that we have to be careful as novelists: Robyn said it’s dangerous to hook modern ideas of independence onto the past. She highlighted the irony of the Scottish Nationalist Party having sought to have the independence vote on the anniversary of the Battle of Bannockburn, given that Robert the Bruce, who won that battle so famously, had switched sides three times and had originally started by fighting on the English side.

This led us to another issue: the relative powerlessness of those who seem to have power. Robert the Bruce was trying to find independence within his own family. Elizabeth 1 said no to the ‘one big thing’ – marriage. Margaret George pointed out that the monstrous Emperor Nero wanted to be free to pursue acting and poetry, but didn’t have the power to do what he wanted to do. Douglas Jackson said ‘power isn’t the same as freedom’.

Finally, there is the question of the novelist’s relative freedom to portray things as they actually were, or as we think they were. Elizabeth Fremantle, dealing with Mary Tudor’s burning of heretics, wanted to ‘demonstrate’ how this made ‘complete sense’ to Mary in the context of her faith: ‘I wanted her to be fully human’. When Robyn was describing the violence of war, ‘it was difficult to know how far to go … dancing across the line of not wanting to do a disservice to history and desensitising readers. … I dance as close to that as I think I can – making it true but not over-egging it.’

All these issues play a part in our perennial interest in reading about the people of the past. As Margaret George says, ‘Everybody knows what they did but we want to know why’. Andrew Taylor refers to the ‘psychological furniture’ of his characters and how he can only approach notions ‘through the individual’. He doesn’t ‘think in terms of these huge concepts’ but goes in search of ‘the way in, the chink’ that will allow him ‘to inhabit that particular period’.

Saturday’s final event in the Hogg Lecture Theatre was a conversation between Lindsey Davis and Jerome de Groot. Lindsey gave a barnstorming performance at London 2012 and she didn’t let us down this time round, either. Many of her replies were teasing or challenging: Lindsey takes no prisoners. Those ‘lads’ writing Roman novels now might not have been able to sell their books had she not found a publisher with The Silver Pigs. Writers should ‘have a real job’ and ‘live in the real world’. They should be hard on themselves and ‘cut, cut, cut’ their work.

She also gave practical advice and there’s absolutely no doubt that she cares deeply about her craft and is dedicated to it. A novel is ‘about people in situations’ – it doesn’t matter if they lived two thousand years ago: they’re still people in situations. As a historical novelist you ‘have to find a way where you don’t use words so modern they stand out or are anachronisms.’ She thinks ‘it is important that you should enjoy doing research. Afterwards, use as little as you can because it’s didactic and boring. The aim of using it is to make it part of your narrative.’ However, ‘Nobody’s going to know what you haven’t read. … You don’t have to know it all. What I’ve put in the books is what I’ve selected.’

When Jerome asked her how difficult it was to get out of the head of Falco, her most famous character, and into the psyche of a new character, she sharply answered ‘This is called writing. This is imagination.’

No argument there, Lindsey. We’re all dancing the line between the known and the imagined. And God, it’s fun.

My upcoming season of Focus Workshops for writers, from October to December, is here.