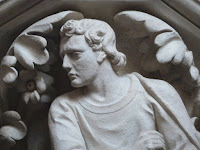 You can’t live in Oxford and not be aware of intersecting circles of literary activity. As the year rolls round to spring again, so the gargantuan Oxford Literary Festival swings into action. I’ve mentioned in previous years how I attended the very first OLF back in 1997, when it was a weekend affair held at the Oxford Union. Since then, it has grown, just a bit …

This year I attended David Grylls interviewing Tracy Chevalier about her career and her latest novel, in the Divinity Schools of the Bodleian Library. Here’s the thing about OLF - the locations are a great draw in themselves, regardless of who’s speaking. Over the years, I’ve sat in the Oxford Union debating chamber, various rooms in Christ Church and Corpus Christi, the Convocation House … History swirls around you as words fly up and lodge in arches and carvings, dart under oak doors, swirl down stone spiral staircases … 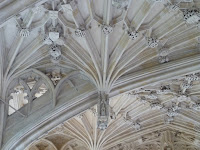 The Divinity School beckons you to crane upwards at its remarkable stone hammerbeam ceiling, studded with shields and angels, or out through its many-paned windows to the Sheldonian Theatre looming just outside.

Tracy Chevalier, meanwhile, discussed her career trajectory, talking about being supervised by Rose Tremain at the start of her career, about being an American living for many years in England, about how her career has developed without any rigid plan: ‘I never really know what I’m going to write next’. She focused on the importance of research – ‘It triggers the story’ - and how research methods have changed from hours in the library to the treacherous ease of the internet: ‘I’ve learned what I can trust and what not’. She then gave a reading from The Edge of the Orchard, which is set in 19th century America, and features the Californian gold rush. (Tracy Chevalier will also be appearing at the Historical Novel Society Conference here in Oxford, 2 – 4 September. See www.hnsoxford2016.org)

Historical fiction was also the theme a few days later: Paul Blezard interviewed three HF writers in the no less glorious surroundings of Exeter College Chapel. Once again I found myself gazing up and around at the general gorgeousness while the three novelists answered questions about their work and about HF in general.

Robyn Young, who has written about the Crusades and about Robert the Bruce, is embarking on a new series set in the 15th century, starting with Sons of the Blood. She talked about ‘method writing’, meaning that she learns skills like black-powder firing to bring the history to life – she could describe the ‘mad, fizzing noise’ of the powder in the barrel of an arquebus, adding ‘How can you put it into a book unless you’ve experienced it?’

Antonia Hodgson sets her work in the 18th century, a period often overlooked by readers – her latest, The Last Confession of Thomas Hawkins, is a sequel to the very successful The Devil in the Marshalsea. In the debate about whether historians are justified in looking down their noses at fiction-writers, she reminded us that ‘every historian is writing a story as well’. For her, research ‘triggers the story’ because something in it ‘will just resonate’, but that ultimately the research must be ‘put to one side’ for the story to thrive.

Jason Hewitt’s second novel Desperation Road is set at the end of World War Two, which he regards as ‘a huge vat of stories’. He walked two thirds of the route his main character takes in his search for identity. For Jason, to be exhausted and ‘folding in on’ himself was ‘inspirational’ and far better than just sitting in the British Library. (I knew Jason already from his appearances at Short Stories Aloud in Oxford and I’m looking forward to reading Desperation Road, one of several purchases during OLF week.)

Clare Armistead chaired a discussion the art of short story writing at Jesus College – the location this time a less romantic modern lecture theatre. I was particularly interested as I’m teaching a Fictionfire workshop on writing short stories on May 7th. Helen Simpson described her process of composition as a slow accumulation: ‘they build up like a coral reef’, the stories often triggered by a situation where ‘someone is uncomfortable’. Frances Leviston is a poet now making the ‘journey’ from poem to story and finding the ‘discomfort’ of expanding, having to force herself to be relatively ‘long-winded’. As you’d expect, both celebrated the precision of observation and the economy of composition the form demands, while highlighting the problems of readers assuming stories are autobiographical or inhabit a peculiarly feminine sphere. They also compared short stories with novels, describing how ‘the mundane is freighted with more than it is in the novel’ and how readers are more forgiving of a novel, implying that there’s more effort involved, paradoxically, in reading a short story, precisely because of that weighted quality. They both talked of the discipline of editing: Frances said ‘nothing on the page is sacred’ and that you should experiment with how much you can take out.

Finally, dear reader, I appeared at the Festival this year. I’ve been a member of local organisation Writers in Oxford (www.writersinoxford.org) since the 1990s: this year we were offered a spot during the festival to promote how we can be of use to local published writers. I was one of those volunteering to give a short talk and reading at the free event at Worcester College.

We were delighted by the numbers who turned out to our event and the Q & A session afterwards was a lively one. My fellow writers Marcus Ferrars and Barbara Lorna Hudson gave readings – and Barbara later also gave a reading at a free event in Blackwell’s Marquee. She has just published her novel Timed Out and her reading went down very well – and the book was a sell-out! She was accompanied by fellow WiO member Sylvia Vetta, whose Brushstrokes in Time was recently launched at Blackwell’s. The intersections of literary activity have been working brilliantly lately. A couple of weeks previously, I’d chaired a Writers in Oxford panel on the book-retailing industry at Waterstone’s, with representatives from local independent bookshop The Book House and Blackwell’s giving us detailed feedback from the bookselling front. They were quite optimistic about the current state of book-retailing. People, it seems, still read and love books and booksellers have become ever more imaginative and resourceful in the way they sell books.

In OLF week, our local newspaper, the Oxford Times, included in its Limited Edition magazine an article on Oxford as a city of inspiration to writers – the feature included contributions from Robert Bullard, the chair of WiO, and from me.

Fictionfireby the Spires: Get into Character weekend workshop/retreat takes place May 21-22 2016! You can come for the full weekend or on a single day basis: still time (just) to book! Four workshops will help you create and develop believable and engaging characters, there's delicious food throughout and you'll have time for your own writing too. Find out more at http://www.fictionfire.co.uk/fictionfire-by-the-spires - places are very limited.

Two Saturday afternoon workshops in May:
How to Write Short Stories: May 7th
How to Edit your Submission: May 14th – details of these are at http://www.fictionfire.co.uk/focus-workshops