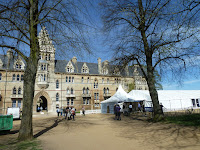 It's been a mad week (it's a mad time of year) so I'm later than I'd intended in reporting on Oxford's Literary Festival, which ran last week. Before writing this post, I took a look at my earliest report on the festival, back in 2007, the year I set up this blog. The post was called Public Showman, private shaman? Be true to the kind of writer you are. Here's an excerpt from it:
Writers, once elusive, mysterious creatures who retreated from the world to think deep thoughts and emerge with sybilline wisdom every now and again - writers are now unashamed showmen, practising all sorts of huckster-techniques, giving us the well-honed schmooze, the well-turned anecdote (and I've been to enough of these things to have heard the same worn anecdote or witticism trotted out just that once too often). And yes, I know there were always writers-as-performers (Dickens springs to mind immediately) - but the point is that nowadays, published writers are automatically expected to be performing seals too, whether it's congenial to their nature or not; it's part of the pact with the publishing devil, it's part of what a publishing house considers before they take you on: are you marketable? 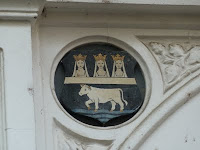 And now my voice is going to take a rest: I'll save the rest of this report for my next blog-post!
BOOK NOW for my courses on Essential Story Construction (7th May) and Creating Narrative Perspective and Voice (21st May) - all details and booking form can be found on my website: www.fictionfire.co.uk
Posted by Lorna F at 15:19

It's marvellous to read this Lorna and know that I will be at the festival next year. I'm sad to have missed Karen Armstrong who is one my favorite non fiction authors, hopefully she'll be back! Thanks for e great reporting!

Thanks for the report.