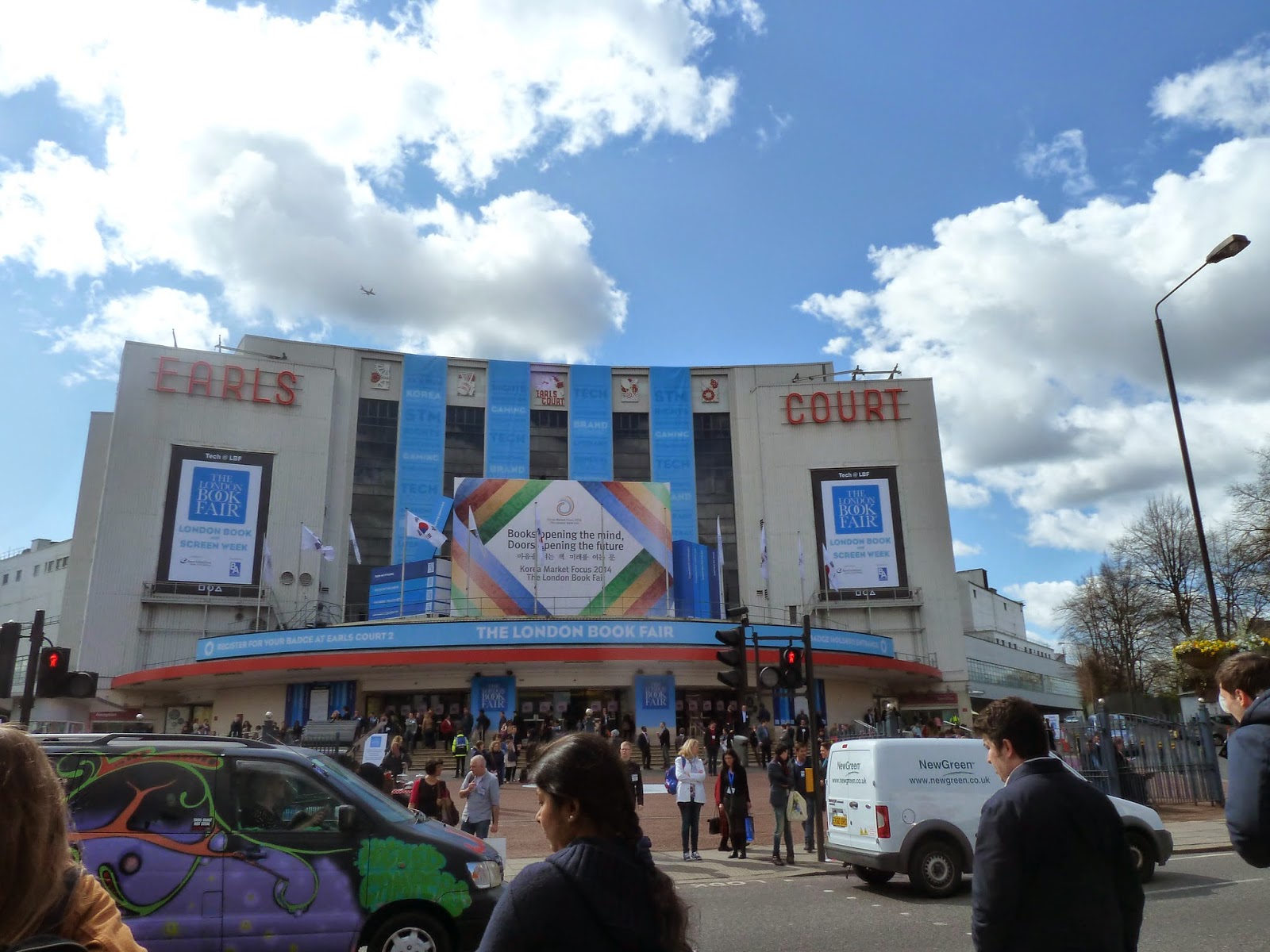 So, my third year of attending the London Book Fair. How did it go? Well, it was great. Although the conventional view for years was that this was not the place for authors to visit, the author presence is strong these days. And I don’t just mean those authors whose agents and publishers bring them along to display like show ponies. I mean ‘indie’ authors, for Orna Ross’s Alliance of Independent Authors was once more championing our interests at the Fair and acting as a channel for information and dialogue between writers and the industry.

Amazon Createspace was there again, and Kobo – and this time Nook was making a big showing, now that British authors can self-publish through Nook Press. There were seminars on aspects of publishing, reaching readers, contracts …

For me, this year differed from previous years for two reasons. The first was that I have just lost one of my dearest friends (her funeral is next week) so there was a part of me not fully engaged with what was going on. The balance of priorities, in the face of sudden loss and grief, shifts.

The second reason for a degree of disengagement was that the topics or approaches in some of the seminars offered no new information or took an approach which was basic (or even, I’ve been told, in some instances, misguided).

So why did I go, then? Community, that’s why. Every year I’ve gone I’ve had the chance to meet people I’ve never met or have only met online. It’s an absolute joy to make these connections and the kind of guidance you’re given in conversation with your peer group is much more useful that seminars, because the advice is born out of real, get-on-with-it experience. Much of this post, therefore, is going to be a checklist of names of wonderful people. Plus piccies, of course!

On LBF Day 1, I arrived in time for ALLi’s launch, in association with Kobo, of the Opening Up to Indie Authors guide, with passionate and inspiring speeches from Dan Holloway and Debbie Young who wrote it. The message of the Open Up to Indies campaign – and there is a petition, please sign it! – is that ‘everybody benefits when author-published work is included.’ Dan reminded us that everyone in the business of books has a duty, just one duty – and that’s to readers. Debbie described how self-publishing had changed her life, how this is the most exciting time to be an author and how ‘every self-publishing author is an ambassador for the campaign.’

It was a delight to meet for the first time, Jessica Bell, Alison Morton and Debbie Young herself – she was handing out the new ALLi lapel pins which we wore with pride! It was also a chance to meet with old friends – Orna, Dan, Catriona Troth of the Triskele books co-operative, Eliza Green, Rohan Quine, Ben Galley, Karen Inglis – all hugely dynamic and warm members of ALLi. (More photos at the end of this post!)

Outside of ALLi, I had a chat with Louise Voss and Mark Edwards, the writing duo I first interviewed on this blog at the start of their phenomenal Kindle publishing success. Since then they’ve had a conventional print deal, Mark has published The Magpies himself and has done incredibly well with it and they are now going to be published by the Amazon imprint Thomas and Mercer. I also ran into Stephanie Zia of Blackbird Books – she recently published my friend Jacqui Lofthouse’s How to be a Literary Genius – an irresistible title if ever there was one!

It wasn’t all about self-publishing though. That’s what I love about the current situation – as writers we’re free to choose whether to aim for trade publishing or not, or select a different path per book, per project. I had a chat with a small publisher about my unpublished children’s book, Hinterland, and we’ll see what, if anything, comes of that. Meanwhile, in the background, the big guys of publishing with their glossy stands and cohorts of glossy people (drinks party after the meetings, dahling? Mwah!) trumpeted upcoming books and current big sellers, from David Mitchell to Anthony Horovitz. In the middle of the hall, more glossy people (how do those women walk the acreage of Earl’s Court in heels like that??) glide up the escalator to the International Rights Centre where deals are thrashed out. 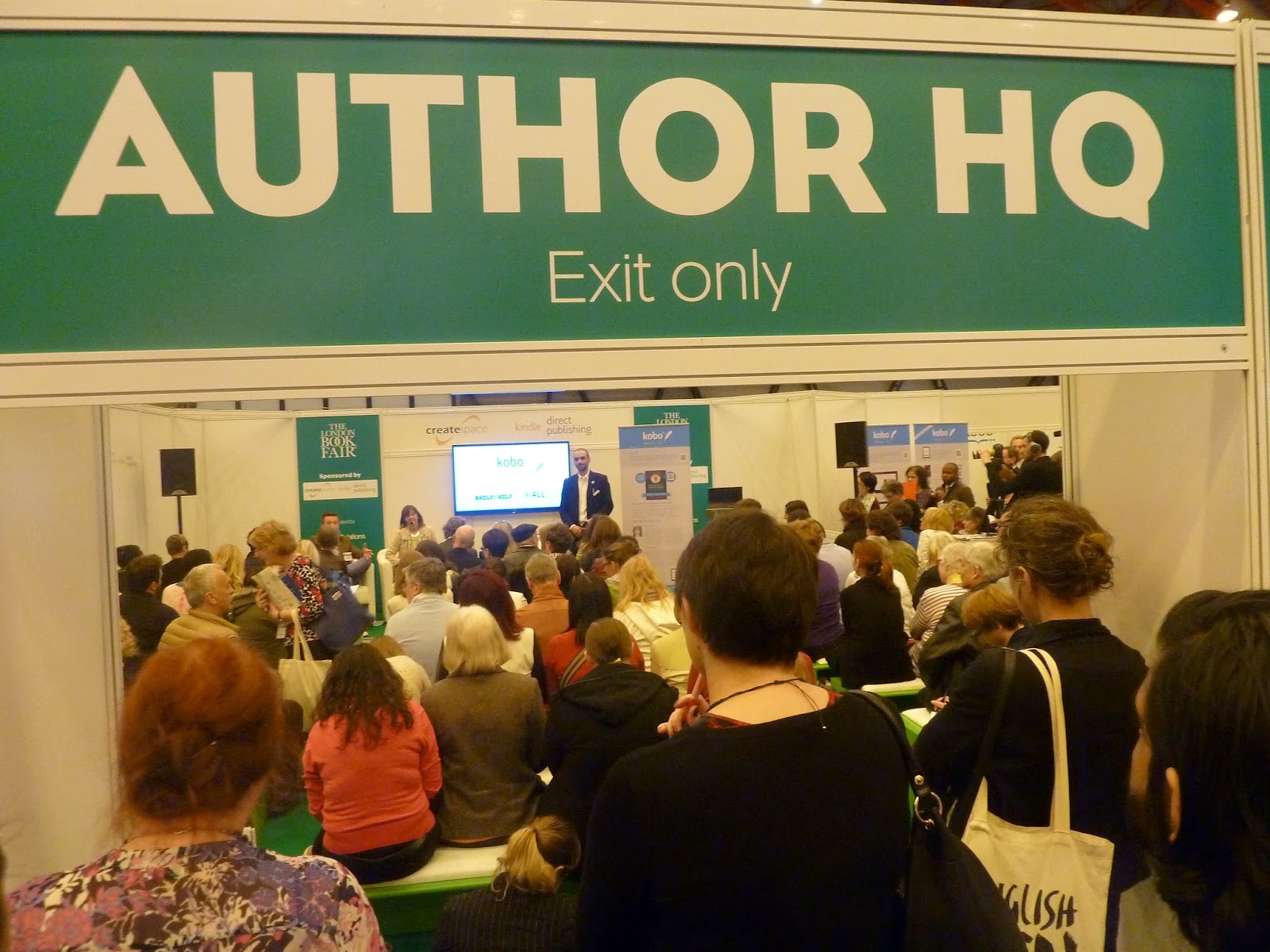 In Earl’s Court 2, the hub is Author HQ which, as last year, was just too damn small for the sheer number of people wanting to attend presentations and seminars. There were a couple of seminars I just gave up on because I couldn’t hear a thing. I finished the day at the Nook party where the drink à la mode was the Nookerberry Glory, a blue-tinted delight that went a long way towards diverting one's attention from the pain of standing and trekking about all afternoon (seen here mischievously modelled by Rohan Quine, with Ben Galley on his left).

A perfect summary of the day, Lorna. As you say, it's fantastic to be able to meet up with fellow ALLi members. What a change from two years ago, which was also my first book fair...

This year, as well as attending some of the self-publishing talks, I made the most of the talks going on in the children's hub and insight talks upstairs on the challenges of marketing children's books, the new world of children's book apps, writing for young adults and so on - all in all a fascinating week. I even stopped by on seminars on book to film... being keen to take advantage of as much as I could. I just hope that next year they are more organised about promoting what a workshop is and how to book one!

Thanks, Karen! Yes, the whole seminar/workshop book/not book thing was very confusing. I'm looking forward to hearing your thoughts on children's publishing and marketing - I assume you'll be blogging?

What a great round-up, Lorna! And a super follow-up piece to your guest post on the ALLi blog earlier this week. Whatever will LBF15 bring, I wonder?

Thank you, Debbie. It was lovely to meet you in person at last. Yes, look forward to LBF 15 ...

Thank you for a great summing up of Day One. The photos are such a welcome memento too. Looking forward to your take on Day Two.