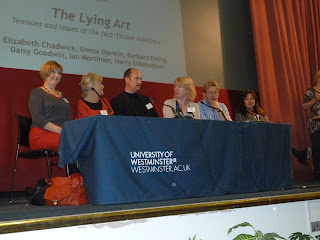 Apologies, first of all, for the delay in bringing you Part 4 of these reports - I was preparing and running my Fictionfire Workshop on fictional heroes and heroines: how we view them, how to create them. Back to Day 1 of the Conference, and a panel discussion, called The Lying Art, featuring historical novelists Emma Darwin, Harry Sidebottom, Elizabeth Chadwick, Daisy Goodwin, Ian Mortimer and Barbara Ewing.

In this lively debate, the writers were addressing that thorny question of accuracy in historical fiction. There's a sliding scale in this: we are, after all, fiction writers. We are allowed to Make Stuff Up. However, where does the making stuff up distort and devalue the history we're trying to bring to life for the reader?

Ian Mortimer said that the criticism shouldn't be based on inaccuracy as much as 'Is it any good?' Emma Darwin reinforced this by declaring 'It's a novel! Get over it!' Harry Sidebottom said he wasn't so hung up on the question of 'lying' as he explains later what it is he lied about. He also pointed out that Roman historians used to do it all the time and that modern historians like Simon Schama are using imaginative approaches.

Daisy Goodwin introduced a note of warning, reminding us of the film Anonymous which not only claims that Shakespeare wasn't Shakespeare (oh, not that all over again!) but that Queen Elizabeth wasn't the Virgin Queen - that she had not one, but two illegitimate children! Here we have one of the challenges of re-envisaging history through art. The writer has a perfect right to imagine whatever they wish, and those of their audience with a reasonable knowledge of the period in question will have an instinctive response in terms of knowing what is or is not feasible or acceptable. However, young audiences often gain their knowledge of history, whether it's of William Wallace (who, apparently, broke off from battle and face-painting to have an affair with the Princess of France) or Pearl Harbour or the breaking of the Enigma Code - from film versions. This fictionalising of history has always gone on -  Shakespeare himself was guilty of prejudicing many of our opinions to fit his artistic or political agenda. His Richard III, the 'bottled spider', is notorious. His Cleopatra does not overtly test out the effects of poison on prisoners to check out which poison is a) painless, b) quick - as she does in Plutarch, because he doesn't want to draw our attention to how sadistic and calculating that is: that's one part of her 'infinite variety' he wants to leave out.

The truth is, it's impossible to be true. We cannot truly enter the mindset of the people of the past: it's our duty as writers, though, to have a damn good try. Too many female characters in HF are feminists in bustles ... or wimples. I adore the novels of Ariana Franklin, for example, whose medieval heroine Adelia Aguilar is rebellious, intelligent, strong-willed, courageous - but very modern in her attitudes, speeches and practices (applying forensic techniques to murder investigation). I still love the books even when being jarred, because they're full of energy, pace and great dialogue. The research is very definitely there - but the writer is doing what she wants with it - and damn your eyes if you don't like it!

Emma Darwin reminded us that we see the past through the eyes of our own era: she said Dickens' view of the French Revolution ought to be more accurate because he was closer to it in time, but we don't see him as being as 'authentic' as Hilary Mantel is in A Place of Greater Safety. She said we need to try to get the mindset right (mentioning the notoriously anachronistic dialogue in Downton Abbey) but that when you've done your research you can end up writing badly if you have your textbook in your hand. So there's a degree of stepping away from the research: 're-imagining implies some measure of forgetting'.

Harry Sidebottom added 'I imagine the bits in between the evidence' and Elizabeth Chadwick claimed that 'as a novelist you're building a bridge between the past and the present for readers to walk over.'

Finally, they debated the relevance of notes and explanations: Ian Mortimer asked if 'they punctuate the bubble', Emma said she 'doesn't want to unpick the rope', the tie between the past and her re-imagining of it for the reader. Harry likes end-notes (so do I) as they give the reader the chance to find out what 'really' happened - to him they're the literary equivalent of 'the add-on bonus features of DVDs'. I thought that was an excellent way of describing them.

The debate is bound to go on and on: all we can hope for is that balance and good sense will prevail. We're writing novels, not lectures: we hope to cast a spell where the reader is drawn so well into a past era they lose the sense of being a visitor, we try not to crush people under the weight of 'forsooths' but at the same time not jar them out of the time-period by having a character in Downton Abbey talk about having a 'time out' (!!!). 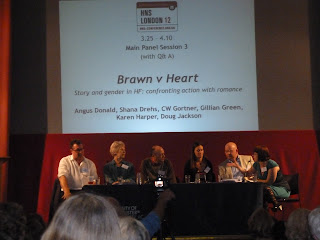 I didn't manage to hear all of the next Panel Discussion, Brawn v. Heart, as I had a pitch-appointment. This was a debate about gender in historical fiction, featuring novelists Angus Donald, Karen Harper, CW Gortner and Douglas Jackson, along with editors Gillian Green of Ebury and Shana Drehs of the Landmark imprint of Sourcebooks. They talked of the cover-design issue I mentioned in Part 1 of these reports - how predictable the images are for male v. female fiction topics. Karen Harper told us, interestingly, that she was writing about Mary Boleyn in 1982, long before Philippa Gregory did: her novel was called 'The Golden Snare' and its focus was on Mary's struggle to survive. However, when it was published, its title was Passion's Reign and it was sold as romance. When Random House re-issued it in 2004, its title had become The Last Boleyn, with a portrait of Mary Boleyn on it - at which point male readers did read it. As she says, different 'covers can give you different audiences'.

Finally on Day 1, novelist Margaret George gave the closing address. She told us she's 'Tudor'd out' and is going back to ancient history for her subjects. She told us, rather beautifully, that we're 'the time machines for other people to go back by', that 'we give a kind of immortality to the figures of history' and that we should never be ashamed of being historical novelists.

Which seems to be a pretty good note to end on!

Part 5 of my Conference report later this week!

Wonderful post, Lorna. I remember the discussions well as I was there too.

Completely agree with you about Adelia Aguilar from the books by Ariana Franklin - she's a wonderful character. What a shame there won't be any more books in that series. Another character I like is Mathilda of Westminster, from a series by Paul Docherty.

Thanks so much, Henriette. Yes, I was so sorry to hear of the death Ariana Franklin/Diana Norman - I really wanted that story of Adelia and Rowley to play out. I hadn't heard of the Mathilda of Westminster series, so will check this out.

Glad to get these write ups in lieu of attending, Lorna. However, I think you meant Margaret George and not Elizabeth at the end of the last posting. Two very different authors!
Anne Easter Smith

Anne- whoops, you're right! Brain went on strike temporarily! I've now corrected it - thanks for pointing this out.