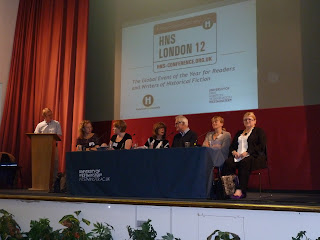 The debate about what historical fiction is and how it's seen continued on the second day of the HNS Conference with a panel discussion of The Many Faces of HF, featuring writers Vanora Bennett, Rory Clements and Sarah Dunant, along with agent Carole Blake, editor Heather Lazare of Simon and Schuster and Project Director of Quick Reads, Cathy Rentzenbrink. Some of us might have been feeling dozy after the Saturday night banquet, or still reeling from the readings of titillating passages after that banquet (I was not at either but heard it was all quite ... stirring!), but if so, we were soon revived by the forceful and passionate way Sarah Dunant chaired the discussion and advocated HF. She asked each speaker to describe their view of the appeal of HF and where HF stands now in the marketplace.

Sarah herself thinks HF is 'on the cusp of a revolution', that we are all part of a huge project, all contributing to the greater picture, 'like pointillist painters'. We no longer just write about kings and queens, recognising that humble people have meaning and interest. History is 'vital' and 'if you're to do it well you have to get your history right'.

Heather Lazare wondered who the next 'marquee name' would be, 'the next Anne Boleyn' - yet also stressed you should 'write what's in your heart'. If you love a period, write about what interests you - all the more so because she tends to do '5-8 rounds of editing with a writer - so you have to love what you're writing'. She said it helps to have your platform, where you can show your expertise in the period and added that the ebooks upsurge has been good for the HF market, leading to a revival in writers such as Jean Plaidy. (Now where have we heard that name before ...?)

Vanora Bennett described the HF writer as 'taking old facts, building them into a new shape, a new way of looking at the past'. Fiction allows you to ask questions. Cathy Rentzenbrink - who also read Jean Plaidy as a child! - says HF 'makes you seem much cleverer than you really are'. She added that publishing 'is like the Wild West just now' and that people can find their own niche according to their interests, and there will be readers out there also interested in that niche. She reminded us that self-publishing and indie publishing can be a route into mainstream success (wish she hadn't used Fifty Shades of Grey as an example, though - so disheartening, my dear ...). The plus side is that 'it's never been easier to be read' but the downside is that it's 'never been more difficult to be paid: nobody has worked out how the money bit works.'

Rory Clements grew up in the Georgette Heyer/Anya Seton era (cue audience gazing mistily back at their own youths. Don't forget Jean Plaidy, though, Rory ...). His opinion is that HF was 'quaint' then, but 'cool now'. He wants to make his fiction accessible, and shuns the 'verily' and 'thou' approach. 'It's got a great future, history', he said - one of my favourite quotes of the conference!

Carole Blake, also dieted on Mesdames Seton and Plaidy, told us that most of what she's learned about history she's learned from HF. Even if there are too many queens, she feels that every writer who tackles what might seem an overworked subject, finds different aspects, creates different people - this tied in with what Philippa Gregory was saying on the previous day of the conference when discussing her take on Catherine of Aragon or Mary Boleyn. Carole enjoys 'a different voice' and is one of those readers who relishes an author's note at the end of the book where the author 'unpicks it' for her.

Heather Lazare noted that when a writer submits an MS to her, she checks out their followers on Facebook and their level of engagement with a potential readership: this, she said, can increase the chance of a higher advance being offered.

Finally, there was hilarity all round when the panel took questions and comments: one avowedly-gay man claimed that in HF he was 'more interested in stable boys than queens' - he meant social class-wise. Of course.

After I attended a fascinating talk by the dauntingly-knowledgeable Ian Mortimer, it was - all too soon - time for the concluding address, given by Lindsey Davies. She took no prisoners but captured hearts and minds with her review of her long and successful career. There were gasps from the audience of amazement, recognition and shock - her words were so direct, unapologetic, sometimes even harsh. Birch twigs for the mind: a good slapping to stir the circulation.

She told us how in 1985 she resigned from the Civil Service, saying 'Frankly, I would rather sweep roads!' She was 35 and was told when she wrote The Silver Pigs, the first of her Falco stories, that there was no market for HF or for Roman novels. Arrow Books passed on it, saying it was too jokey. Ironically, they were later to publish the Falco novels. The month she got a cheque in her hand at last, her money had just run out and she'd had to borrow to pay the mortgage. She wrote The Silver Pigs to use up the research she'd done for The Course of Honour, her first book, which languished in a cupboard for ten years before being printed with no publicity and a smaller advance - 'if you have a book you believe in, be heartened by this'. An editor, on seeing it, said 'This is wonderful - why wasn't I shown it before?' As she shared this with us, Lindsey said 'I'm nearly crying', so the harshness of the struggle for recognition has left its mark, in spite of her ebullience.

For her, history is not central - writing a novel is. She told writers to be 'authoritative, not hesitant' and at the end of her initial speech said 'I will take questions but be warned, I will not necessarily answer them.' She let us know that she is 'a childless orphan which helps a lot, my partner conveniently died, which helps more.' Universal sharp intake of breath in the room. She is, though, making that Virginia Woolf point that having no dependents helps a writer - although she is impatient with those who make excuses for inactivity: 'I really hate people saying they're writers when they don't get down to it.' She doesn't write till gone three in the afternoon, and she 'doesn't do Twitter and Facebook' feeling she wouldn't write as many books as she does with social media to distract her. Well, we know, Lindsey, but there's Heather Lazare over there, telling us she checks our Facebook activity ... what's a poor would-be writer to do? To platform or not to platform? 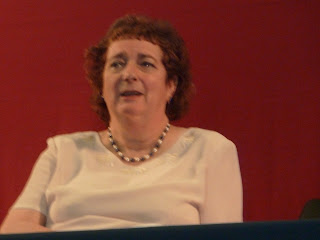 So, there we have it: a wonderful conference we were all sorry to see end. Apart from enjoying the talks and panel discussions, I loved meeting fellow writers - some of whom like Douglas Jackson and Emma Darwin, I'd met before, others who were new friends: so hello again, Dianne Ascroft, Mari Griffiths, Barbara Kyle, Anna Belfrage, Christina Courtenay, Helen Hollick, Lois Leveen (such a shame I couldn't buy her book at the conference!). Plus the writers I've worked with through Fictionfire: Yvonne Lyon, Katherine Clements, Hannah Cole. And finally, so many thanks are due to the indefatigable Jenny Barden, tearing around the hall with the microphone during Q and A sessions, Carol McGrath and Richard Lee himself, onlie begetter of the Society. Thanks for the wonderful venue, the positive and lively atmosphere - and the wonderful goody-bags!

Sadly, I doubt that I'll make it across the pond to the conference next year in Florida - but I'll be signing up for 2014 in Britain and I dearly hope that the novel I was pitching this time will have seen the light of day by then!

Ironically, my next Fictionfire Focus Workshop, on 27th October, is on building your social platform through Facebook, Twitter and ... um, blogging! If you're interested, see details on my website, http://www.fictionfire.co.uk
Posted by Lorna F at 19:16

Terrific reporting of a great conference. Thanks for the memories, Lorna.

You're welcome, Barbara! Glad you enjoyed the reports.

Great to meet you too, Lorna. I'm looking forward to reading your novel partly set in my homeland when it's released - no kings and queens there but you couldn't pick a better setting (ok, I'm biased...)