Philippa Gregory gave the formal opening address of the HNS Conference - and a polished, confident, witty and fascinating speech it was. Some authors are so practised at public speaking that they can hold the audience in the palm of their hand, and she's one of them. Her talk was also beautifully illustrated by a slide-show. She set out to describe her own path towards writing HF, what she thinks HF's appeal is to the reader - and to defend it from the often sneering attitude shown to it by 'proper' historians and writers. I think we all agreed she did a damn fine job!

Philippa studied at Sussex University at a time when the historical focus on 'ordinary' people's lives - and include women in that - was getting going. Throughout her career, as those of us who've read her novels know, she's been concerned to give a voice to the women characters of history and to allow us to see events from their perspective. If at times, I've felt that she becomes a little strident or repetitive about this, I think also that we shouldn't take for granted what has become more usual in both HF and straight history - the focus on the experiences of the downtrodden and the voiceless. We are fascinated by women's history, by the history of peasants and merchants, by slavery - whether it's in the Deep South or, as in Giles Milton's wonderful White Gold (straight history) about white slaves abducted from Cornwall and brought to North Africa.

There is an irony, though, because Philippa is also famous for writing novels about female monarchs - and if they're not rulers themselves, they're at the side of famous men - or at their backs, nudging them somewhat forcefully towards their destinies! During the conference, one complaint was that HF involves 'too many Queens' - that there are only so many accounts of Ann Boleyn's tragic life that we can take. Philippa's answer to this would be that she either deals with women whose story and role in history is not that well known, as with her current Cousins War series - or that she approaches a known story from a different angle. It was this ability to see the potential of a story that led her to her hugely successful The Other Boleyn Girl - which has, to my mind, the most perfect title - a concept in a phrase.  She pointed out that often when we review archive material, we fail to see what's there - but at times, something intrigues, niggles, sets the imagination whirring.  This is what happened when she noticed, in the Navy records, the name of a ship: the Mary Boleyn. Later she found a letter Mary Boleyn had written defending her marriage to William Stafford. She shared the letter with us and it was one of the most gorgeously-phrased declarations of love and devotion I've ever heard. No wonder she had to write the novel! 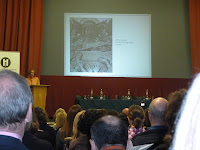 HF, Philippa says, is 'the animation and recreation of a life' in which the writer joins the 'selection of facts' with 'the craft of the novel'. She said 'I shape the story according to my response to' the characters. She likes to use present tense as she finds past tense narrative 'stodgy' - I disagree, often finding a huge novel written entirely in the present tense rather wearing.

Her plea is that we should be proud of ourselves for being novelists, because a 'novel rescues history from the past'. If it's done well, it 'conquers death and time', 'it tells the story history cannot tell.' As a further defence, she quoted the waspish historian David Starkey's would-be withering put-down of her work as having allocated 75 pages to each fact, which she blithely dismissed, reminding us that historians are describing imagined characters quite as much as novelists do - only they don't admit it. If anybody has watched the laboured versions of history television gives us these days: the centre-stage historian pacing through the halls of the famous, the bombastic use of music to flog us into feeling the requisite emotions, the repetitions and over-simplifications and the dire use of lame vignettes from the past, acted out in soft-focus behind The Historian - well, I think any of us would prefer to pick up a good novel where the experience is somehow more direct, more genuinely involving, than any number of versions by the Schamas or the Starkeys of this world.

Philippa finished by reminding us that the very first novel was written by a woman (yay!), a very long time ago: Lady Murasaki's The Tale of Genji, in the early eleventh century.

And how did Philippa herself come to a love of HF in her youth? Jean Plaidy, of course! (See my previous post)

I thought I'd be writing a couple of reports, but I seem to be producing a series! I'll post about the rest of Day 1 of the Conference tomorrow.

A reminder: next Wednesday, 10th October 2012, is when bookings will close for my next Fictionfire Focus Workshop, I Need a Hero, on 13th October.

In the workshop we'll be exploring how to create believable and sympathetic heroes and heroines. How do we define heroes? How do we stop them from being too good to be true?

Full details of this and the other workshops in the series are at http://literascribe.blogspot.co.uk/2012_08_01_archive.html and on my website www.fictionfire.co.uk
Posted by Lorna F at 12:00